A new interactive video featuring actors with disabilities reveals what it can feel like for vulnerable people when a charity fundraiser knocks on the door.

It’s been created by elearning company, Sponge as part of an online training programme for The Public Fundraising Association (PFRA), the membership body for charities and agencies carrying out face-to-face fundraising.

Three actors play the role of homeowners who are unexpectedly disturbed by a door-to-door fundraiser.

They all have disabilities that are not immediately obvious and the training video explores the rules on how fundraisers should behave when dealing with people with physical and learning impairments.

Each video shows two different perspectives so people can see the same encounter from both the fundraiser’s point of view and that of the person answering the door.

“This is a ground-breaking approach that has never been more needed in the charity sector. Creating this innovative platform for fundraisers to learn on has been a huge leap forward for us. The interactive video is a powerful way to highlight issues of vulnerability and help fundraisers understand what it can feel like to answer the door to a stranger. Driving up standards in face-to-face fundraising using this online training will help to create better fundraisers and longer-term donors.”

Actor, author and disability campaigner, Lewis Adler appears in the interactive video as a homeowner with a hearing impairment. 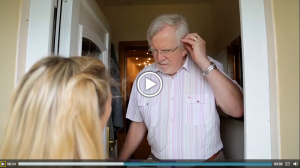 “I’m one of more than 70,000 known Dystonia sufferers in the UK. I truly value any opportunity to raise awareness of the condition, and that of hearing loss. Without a doubt, this initiative by the PFRA lifts the training of face-to-face fundraisers and disability awareness to a new level. Indeed, it has been a privilege for me to be involved in its production.”

The interactive video also features actors Di Cram who is blind, and Ellen Coulton who has Tourette’s Syndrome.

The PFRA has invested in a state-of-the-art elearning training package, which includes the interactive video, to help fundraisers stick to the rules and follow best practice.

The online learning is mobile-friendly and also includes elearning games to help make it as dynamic and engaging as possible.

All PFRA members can access the programme for free and it’s expected to help supplement the training of hundreds of face-to-face fundraisers across Britain.

Sponge is one of the Britain’s leading elearning companies and works with both private and public sector organisations to provide tailored-made online training courses, games and interactive videos.