The human brain, taking around 20% of our energy and containing around 86 billion neurons, is the hero in our learning story. It enables us to process information, make decisions, remember birthdays, and solve complex problems.

How familiar are you with what’s between your ears? In this podcast, educational neuroscientist Paul Howard-Jones explains the basic structure of the brain and key functions relevant to learning, before we get down to brass tacks and ask who’s really in charge of our decision making, emotions or reasoning?

Thanks to developments in neuroimaging in the past 20 years, we know much more about the human brain than ever before. For example, neuroscientists can now see the whole brain shimmering when even quite simple tasks are undertaken, disrupting long-held ideas about right and left-brain dominance.

It’s useful to understand the basic structures of the brain and what functions they carry out in relation to learning. So, let’s break it down, starting with the four cortices, or lobes.

The four lobes of the brain 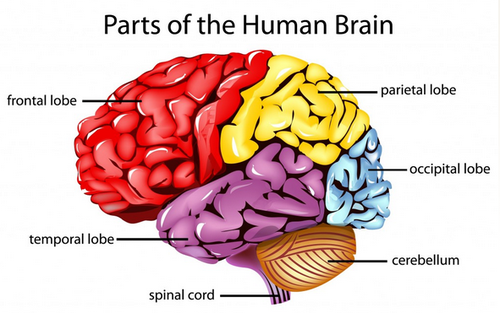 This part of the brain is responsible for functions including conscious reasoning, decision making, and expressive language. It is the go-to place for learning, as it’s here that the process of identifying goals and how we might achieve them occurs. The frontal lobes are also very important for working memory which is our limited ability to hold information. (See this podcast for more on working memory).

This part of the brain enables declarative memory formation: that is, memories of anything that can be made explicit, such as facts or events. It is also responsible for processing of sounds.

These areas are important for automatic processing including language as well as combining information arriving from multiple senses.

Located at the back of the brain, this area is important for visual processing, including being able to see images and word symbols.

The cerebellum, or ‘little brain’.

This area used to be considered important for motor function, only, but we’re beginning to learn it has an important cognitive function, including the timing of speech.

The brain is divided into two hemispheres, joined together by the corpus calossum which can be considered an information superhighway transferring data between the two hemispheres.

Three structures within the brain are important for learning.

This is an important emotional centre, tending to be associated with adverse responses or fear.

Located right next to the amygdala, the hippocampus is important for laying down memory and is the basis for emotional memory.

Comprised of a combination of structures, including the striatum, which contains a pea shaped structure called the nucleus accumbens. The nucleus accumbens can be thought of as a desire centre, as the more we want or desire something, the greater the activation in this structure. Learning and being curious will activate the nucleus accumbens, and this reminds us that there is an important visceral and emotional aspect to learning.

The role of dopamine

Dopamine is the neurotransmitter du jour amongst learning communities, but it’s worth noting that there are many neurotransmitters – chemicals that play an important role in sending signals between neurons - and neuromodulators, hard at work in the brain.

Dopamine plays a vital role in learning. When we want to learn something, this activates the nucleus accumbens, (our desire centre), triggering the uptake of dopamine from deep in the midbrain into the cortex. Dopamine increases ‘neuro-plasticity': the ability for neurons to change.

This is the holy grail, because we can only learn by neurons changing their connections with each other. By increasing neuro-plasticity, dopamine helps accelerate the rate at which learning happens. For a learning professional, this is critical, as it provides the scientific basis for creating desirable learning experiences that people actually want to do.

Many of us are familiar with the idea that we have a very old reptilian brain that must be suppressed in favour of the shinier, newer, more rational parts of our brain that evolved much later and made us intelligent.

In fact, all vertebrates have always had a basic three-part structure to their brain, but what’s changed - and what marks humans out as different from other species – is the connection between these areas.

It’s not that we have managed to get rid of, or suppress the old reptilian brain. Rather, it’s that during evolution, the connections between the inner emotional centres and the outer cortex have increased.

Strikingly, it has been found that people with greater grit and resilience have stronger connectivity between the reward regions and the cortex than the rest of us. They are able to listen to their emotions, without being led by them, whilst also being able to make rational, pragmatic decisions.

Who’s in charge – emotions or reasoning?

Our frontal cortex might believe it’s in charge of our decisions, but in fact, we are consistently non-rational in our decision making and we now understand that emotions and reasoning are tightly intertwined in the brain.

Basing predictions of behaviour on the economic value of the choice doesn’t seem to explain the things that people do. The current condition, recent history, and culture to which we are exposed has a pervasive influence on the actions we choose to take. We’re making irrational and probabilistic decisions in the moment all the time.

By contrast, the identical vision statement when presented as if it had come from an out-group, ie a political party that was not supported by the participant, did not activate the same regions.

The researchers conclude that followers process inspirational leadership messages based on the messages themselves, as well being greatly influenced by the group they identify with.

If we’re aiming to persuade people towards a course of action, it’s not enough to have a visionary speech; people need to identify with the cultural values and feel part of the in-group. The implications for organisations here are clear; a sense of belonging to a company and standing behind its vision can make or break people’s willingness to act in line with a desired behaviour.

If you’d like to discuss how we can make a difference to your business, with the best technology, content, and learner insights...