Sponge named International Company of the Year at Global…

Heralded as one of the region’s top exporters, Sponge was named International Company of the Year (£1m to £10m turnover) at the Insider South West Global Growth Awards 2019. Presented by Ernst & Young at a ceremony held at the Apex City of Bath Hotel on 19 June, this win comes hot on the heels of the digital learning provider’s success at the Plymouth Business Awards, where it was named Medium Business of the Year.

Judged by industry figureheads, including representatives from the Department for International Trade (DIT), Confederation of British Industry (CBI) and International Trade Matters (ITM), the Global Growth Awards celebrate ‘overseas achievements of South West Industry’. Insider reported that ‘with uncertainty persisting on the world stage over a Brexit deal’ and implications for trade deals, the awards provide an ‘ideal environment to recognise the South West’s global players that are pioneering and innovating around international trade’.

Sponge’s win is reflective of the fact that the company has grown to be Europe’s largest independently-owned custom digital learning provider; working with some of the world’s largest brands, its digital learning solutions are used in 124 countries worldwide; sales more than doubled between 2016 and 2018 and continue to increase; around 45 per cent of business comes from overseas markets; European sales increased by 30 per cent from 2017 to 2018; and the organisation has expanded from its Plymouth headquarters to Bristol, London, Sheffield and Dublin’s Silicon Docks.

It was Sponge’s commitment to expand its overseas business and desire to leverage Brexit as an opportunity that led the company to open its first office outside the UK in 2018. Today, its Dublin base provides a physical presence in the EU from which the company plans to further expand its footprint in Europe.

“By its very nature, digital learning transcends geographical borders. We work with global brands to deliver a consistent learning experience for employees, regardless of where they are in the world."

Explaining the company’s export success, Sponge’s Founder and Managing Director, Louise Pasterfield, said, “By its very nature, digital learning transcends geographical borders. We work with global brands to deliver a consistent learning experience for employees, regardless of where they are in the world. Our first foray into the overseas market came when we won a UN contract to induct humanitarian workers around the world. We have since partnered with the likes of AstraZeneca to roll out compliance training to more than 60,000 employees in over 100 countries and Tetra Pak to deliver an employee onboarding experience that includes 360° video tours of the company’s global business locations.”

Commenting on the Global Growth award win, Louise added, “We’re incredibly honoured to be named International Company of the Year. It’s thanks to our clients that we’ve had opportunity to work on some really exciting international projects that have helped put Sponge on the global map. But, just as important, to perform at this level requires an incredibly talented team; that’s exactly what we have at Sponge. We believe in attracting and nurturing the best talent in the region, and throughout the UK, to reach a global audience; that’s why we recently launched our Design and Animation graduate academies.”

David Clensy, Editor of South West Business Insider and chair of the judging panel, said, "There is a clear demand for South West goods across the globe, which shows no sign of slowing down." Sponsored by Burges Salmon, Ernst & Young, HSBC UK Bank and Qatar Airways, you can view photos from the 2019 South West Insider Global Growth Awards here. 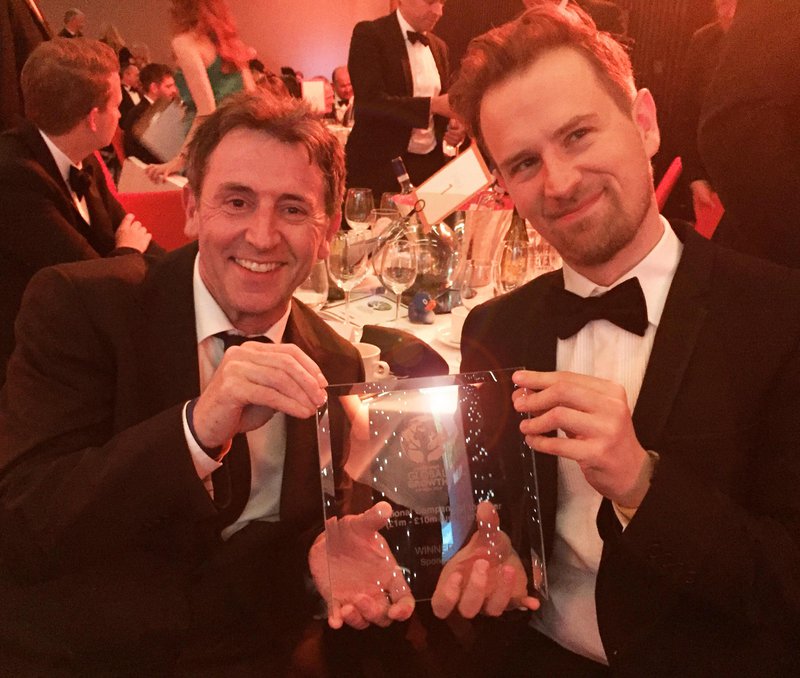 To be in the running for the South West Insider Awards, Sponge was required to outline what prompted it to start trading in overseas markets; highlight key driver(s) to growing business internationally; explain what it has done over the last 12 months to develop international trade, describing its biggest achievement; explain how it targeted particular territories, including which regions and why; give details about how many countries it is active in and how it integrated into new markets; highlight what percentage of trading is outside the UK; and outline key international opportunities over the next two years.

A multi-award winning business, Sponge was named Learning Provider of the Year at the 2019 Learning Awards and won silver in the Company of the Year category at the 2018 Learning Technologies Awards.